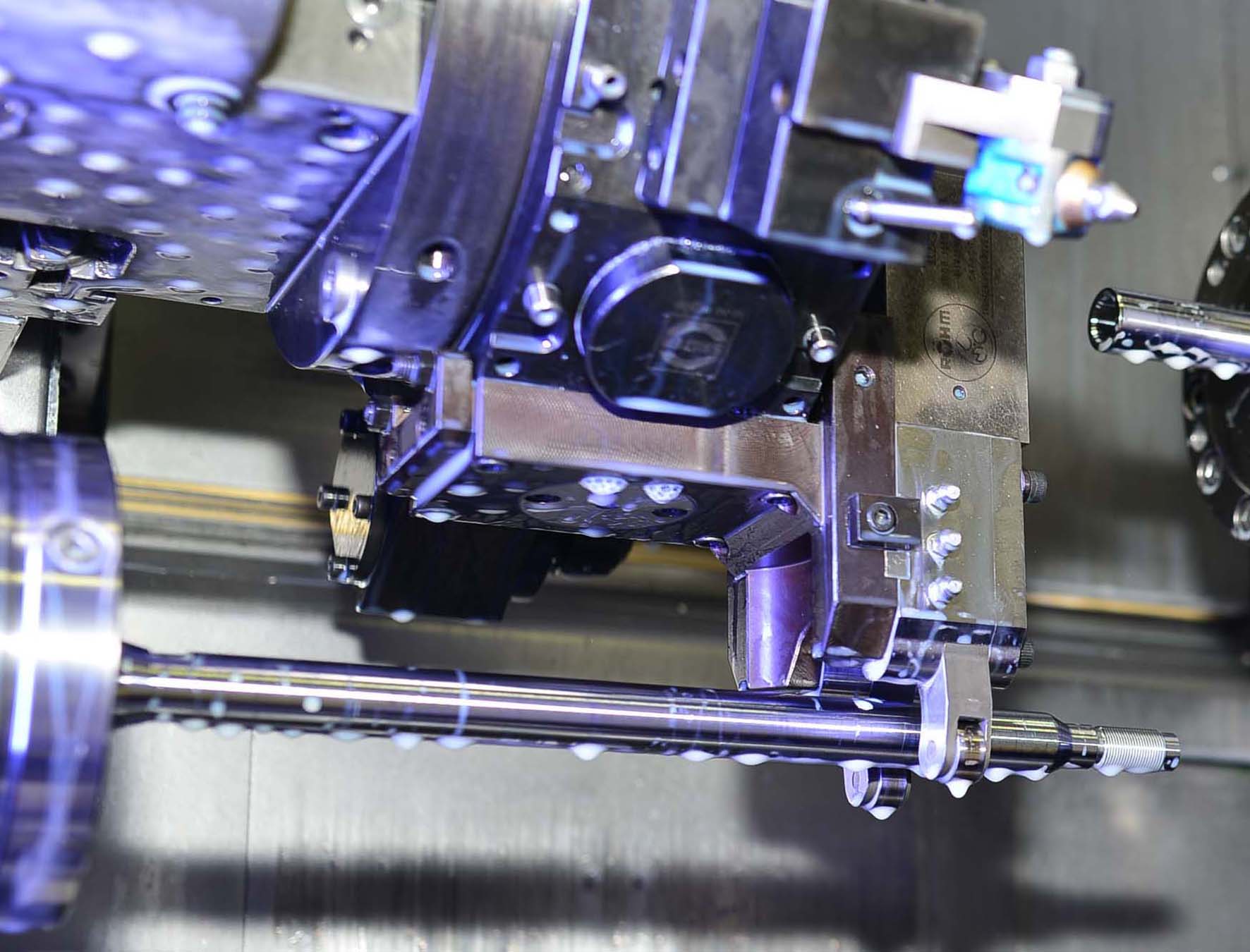 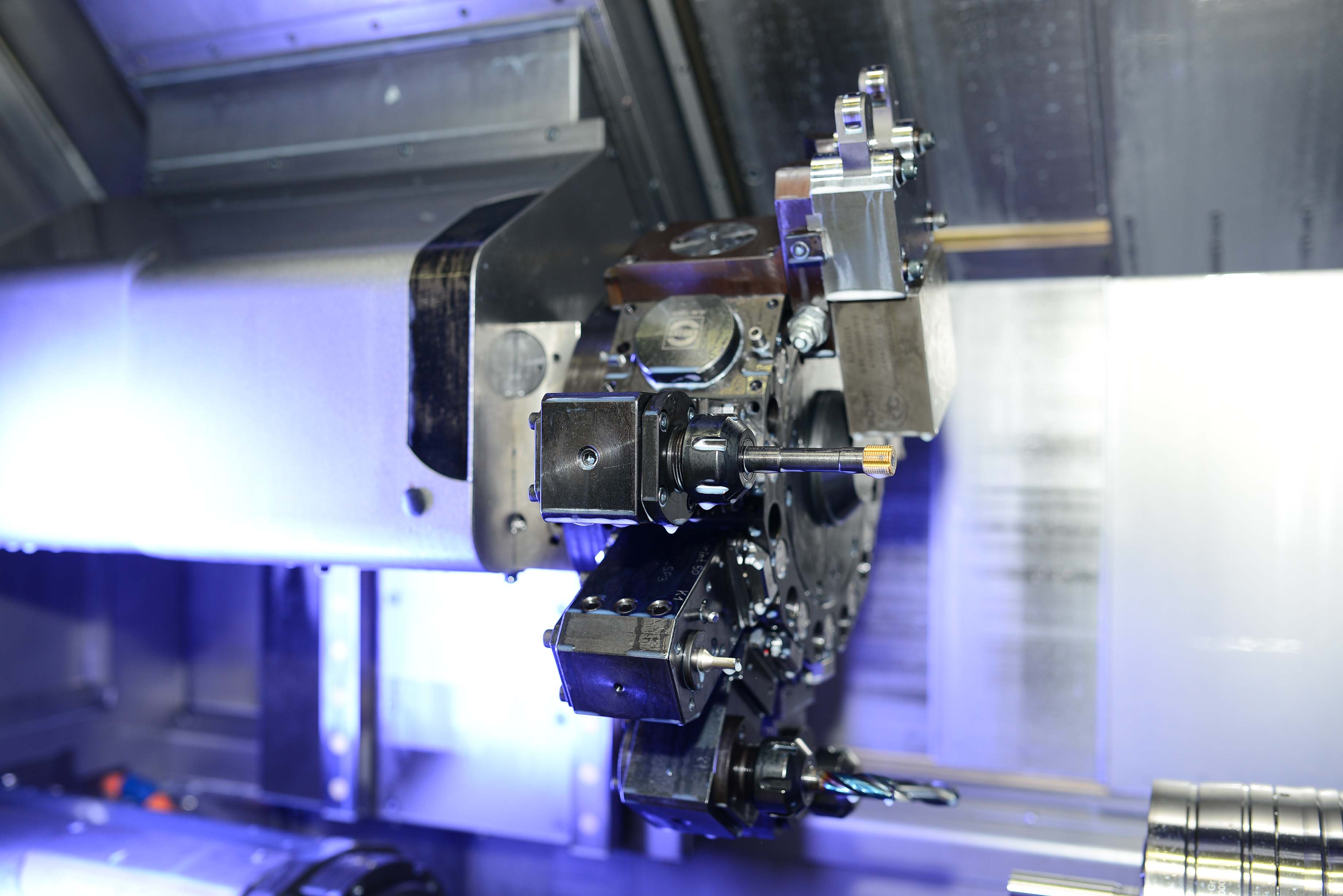 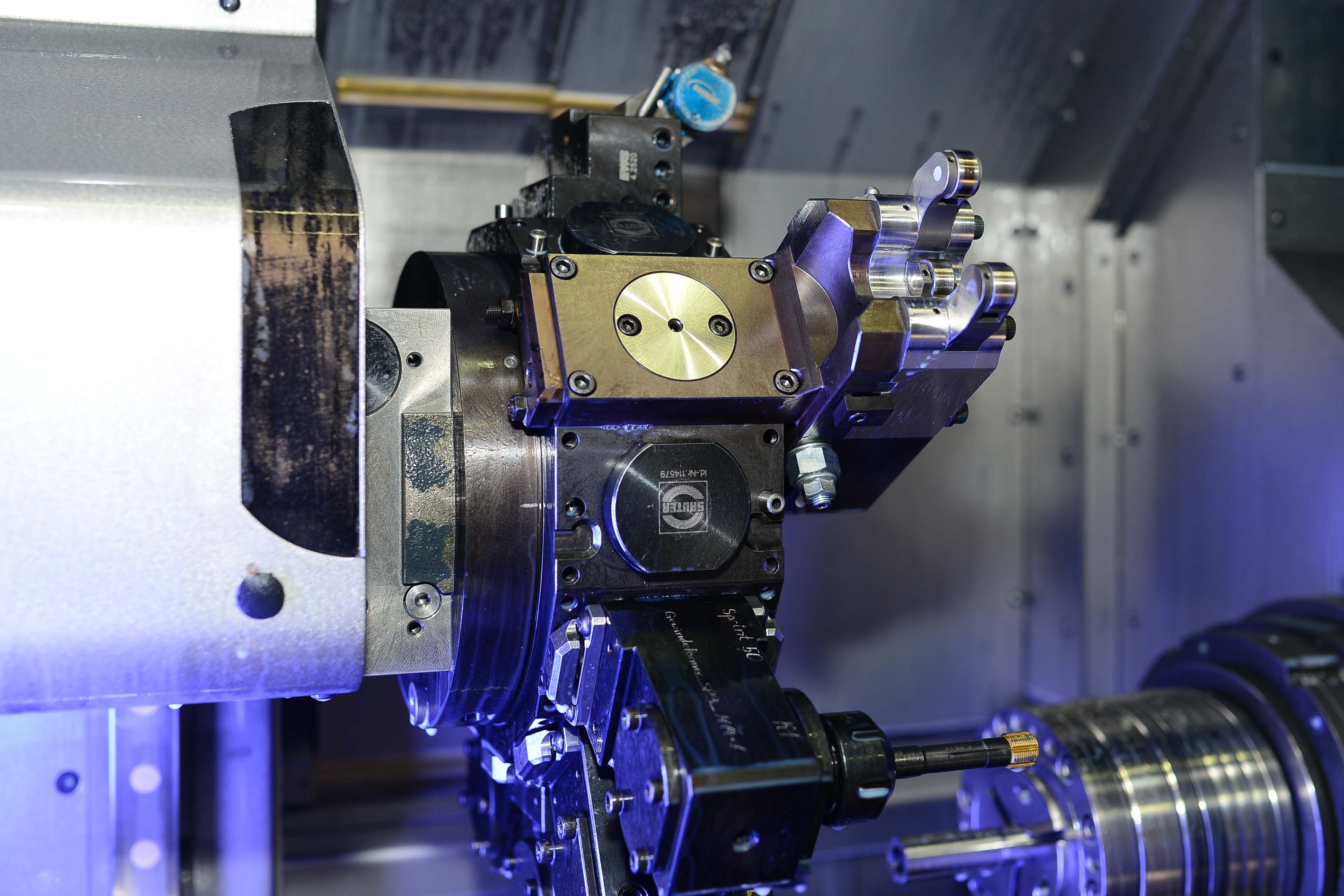 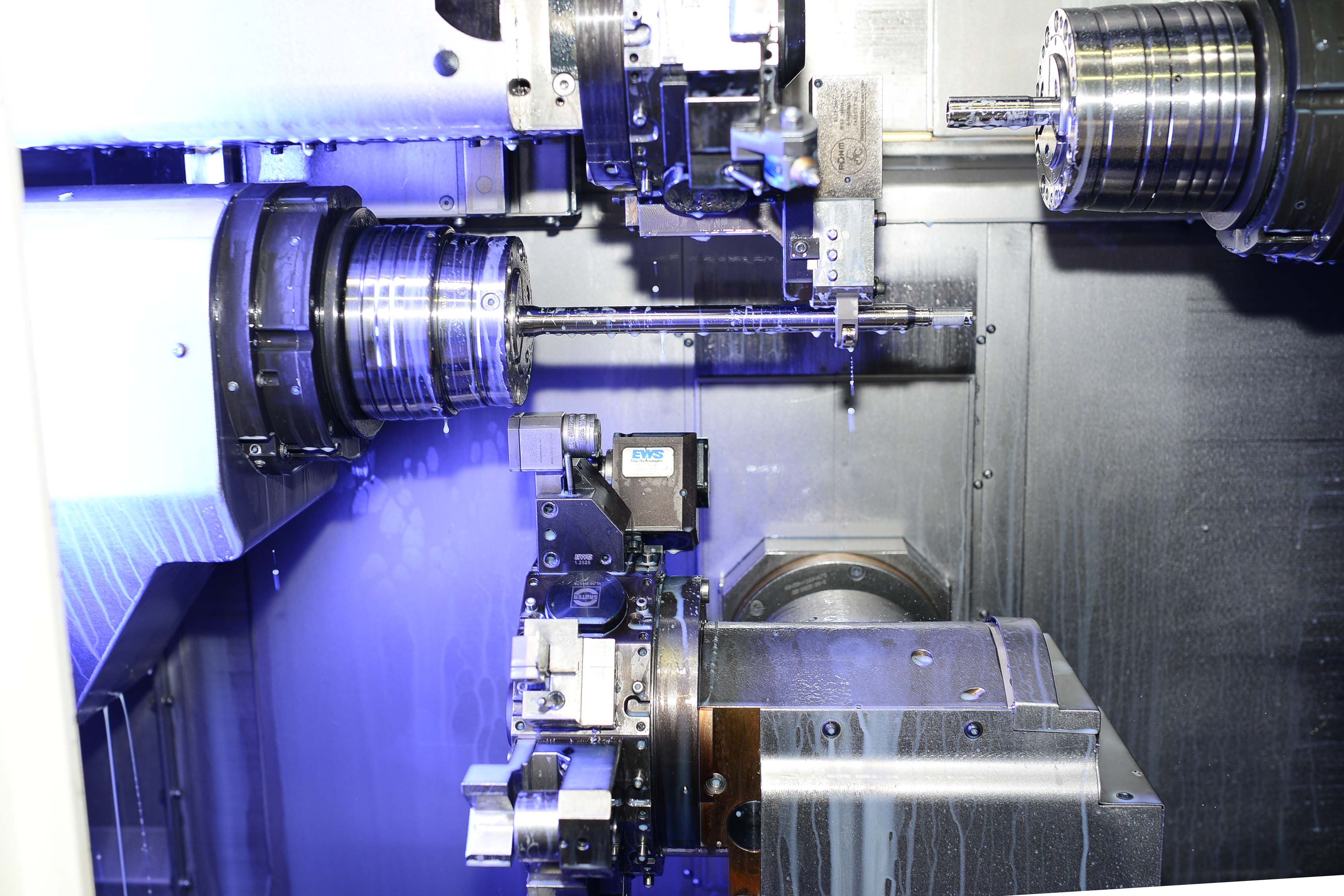 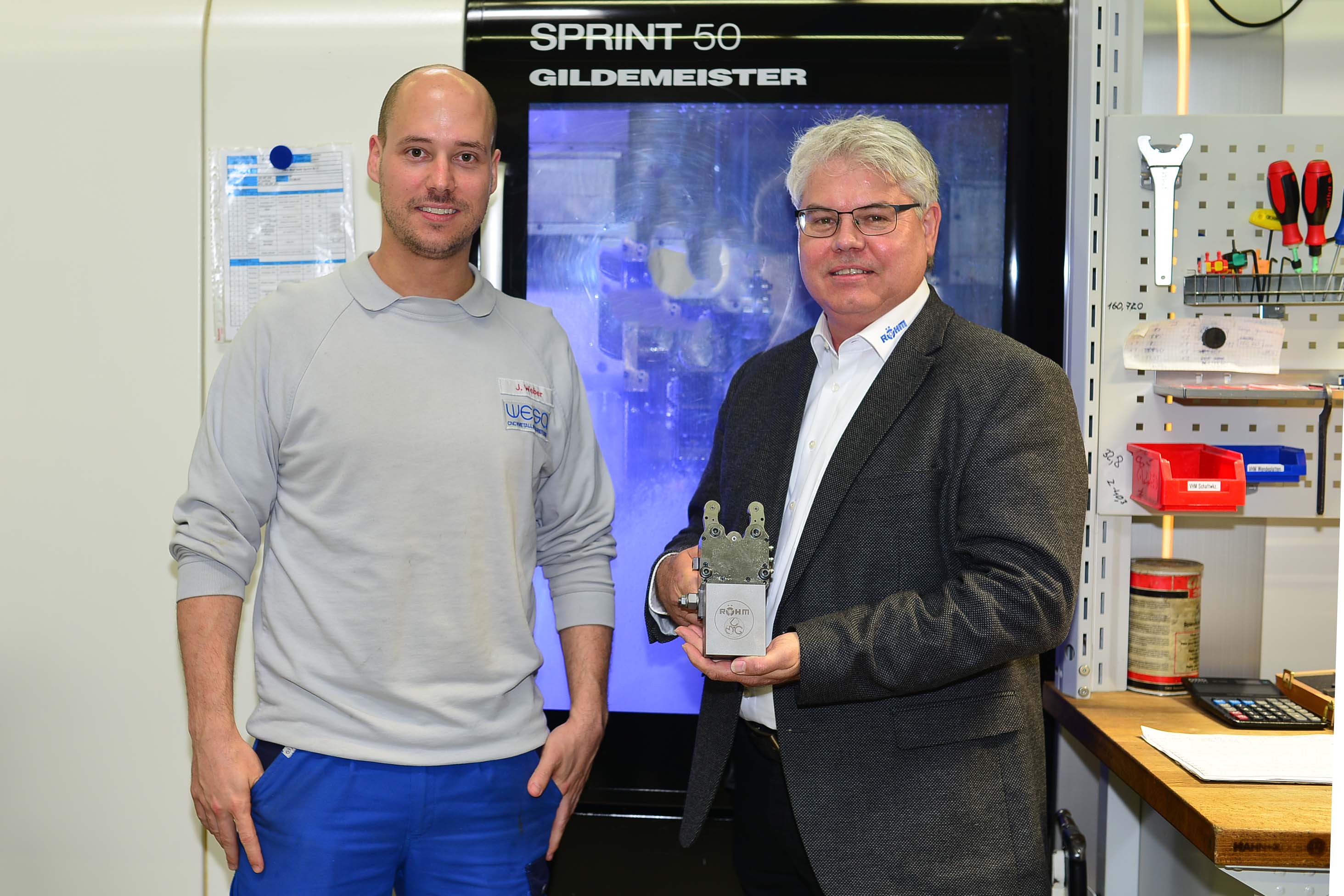 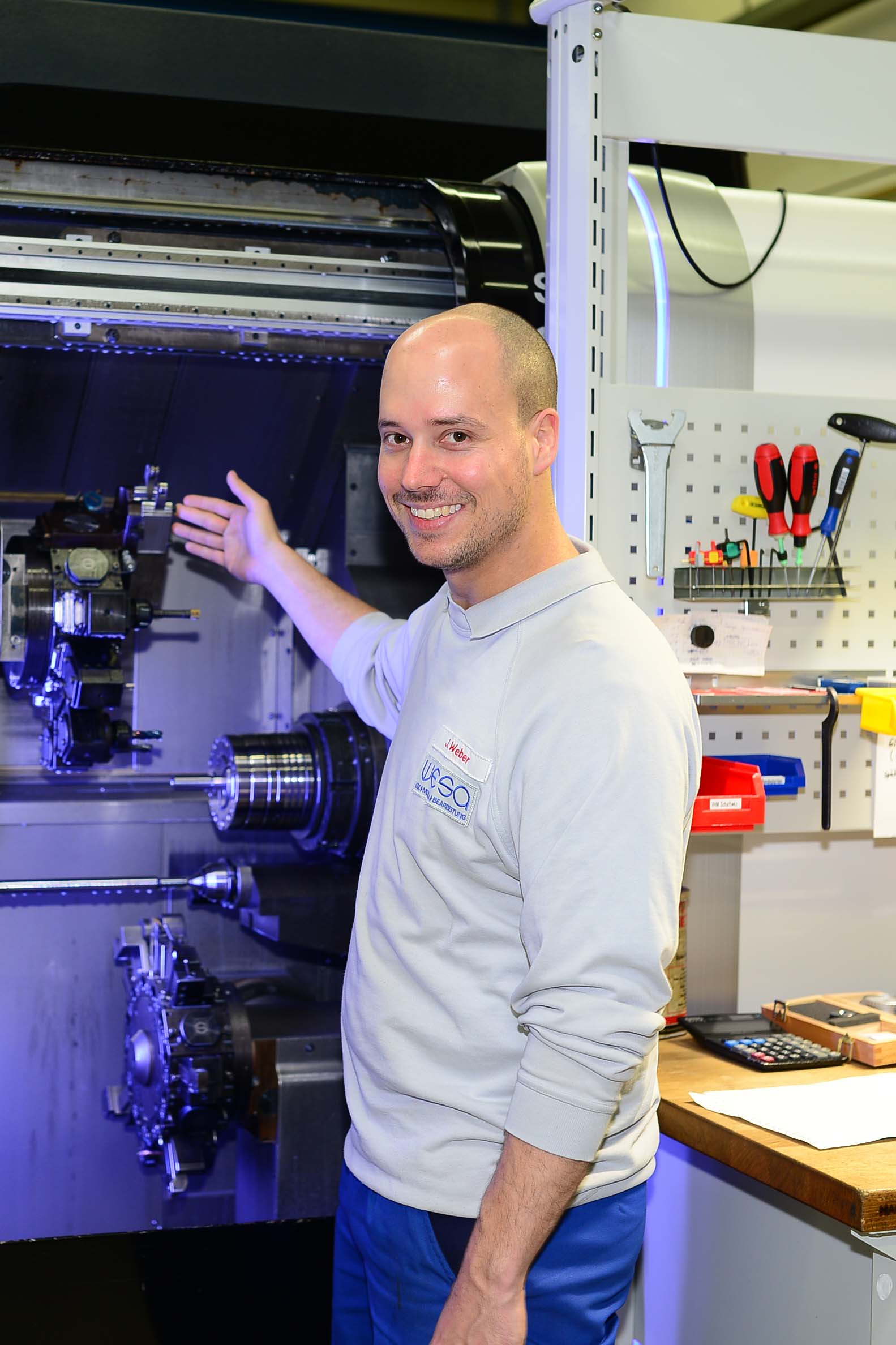 Even when no steady rest is provided in an existing lathe turret – it is not necessary to retrofit an oil hydraulics unit to control a turret mounted steady rest. There is an innovative solution that uses the coolant pressure at the control to signal the steady rest to clamp as per the program and it is opened via the spring pressure. This product has been a joint collaboration between Röhm and WESA GmbH.

WESA is a reliable CNC partner that caters to all production levels. Located in Waldstetten, Swabia/Germany, the company relies on high quality, fast implementation and absolute adherence to deadlines. These are qualities on which Johannes Weber looks proudly: “We are a high technology solution supplier”, emphasises the production manager and mentions the strengths of the company, “quick and mass production of intricate and complex components in series”. For him, it is certain: “When things have to be done quickly, customers come to us and do not go to the big names in the industry, who are attuned to mass production and are, therefore, slower to respond.”

From the prototype to series - quick, flexible, extremely precise

Wesa GmbH is a family-run business. As a pure service provider, it specialises in metal processing and employs around 50 workers. Specialised in complete CNC machining, the company makes use of extensive machinery - from prototype building to mass production. Whether turned or milled parts, ready-to-install work pieces and systems including hardening and surface finishing, the corresponding machines and tools are available for the most diverse production applications. Typical orders vary from the production of ready to install pinions to gear shafts. Customers include the major automobile manufacturers, such as Porsche and Daimler, as well as Bosch and ZF among the automobile suppliers. Wesa works not only with high automation, but also quickly and flexibly. For this reason, respective buffer stations are available between the individual machining centres for turning and milling. “If a turning cell fails, then the entire production does not come to a standstill," says Johannes Weber, proudly referring to a recently completed project for a car manufacturer based in Stuttgart: “Starting with the initial drawings, we manufactured and delivered a completely new work piece, which involved several work steps, in just 13 weeks”.

The DMG MORI DMG Sprint 50 CNC lathe has been used for a long time in the machine portfolio of Wesa, enabling the supplier to process raw material in a flexible way - simultaneously and unmanned. Long, thin components are primarily manufactured on this machine. Work pieces are usually supported with a steady rest, in order to process them with high precision.

Small turret and no oil hydraulics

Originally, no steady rest was provided on the Sprint 50 turning centre, notes Johannes Weber, but now, thanks to the cooperation with Röhm, one has a fully functional work piece support – despite the design specifications of the machine: small turret, restricted work space and no hydraulic connection. The framework conditions were thus defined clearly by Wesa to Röhm. Given the specifications and small work envelope the company had to deliver an innovative solution that would satisfy the parameters of the project, including a clamping range of 18 to 36 mm.

Two oil hydraulic connections are normal in a standard turret. But since Johannes Weber did not want to install another medium in the machine, the idea of using the coolant and existing line to trigger the control commands started to take shape. Initial market research and implementation did not lead to an acceptable result. The contact with the clamping device manufacturer Röhm, with whom a long-standing cooperation exists, then led to the hoped-for problem solution.

The company Röhm is regarded as an internationally operating specialist for clamping and gripping technology, has its headquarters in Sontheim an der Brenz, employs around 1300 people worldwide in over 60 branches and agencies. Röhm manufactures high-quality clamping technology - from the smallest chuck to the high-tech power clamping device. The company focuses on subjects like Industry 4.0, lightweight construction, energy efficiency and additive production.

Although the clamping device professionals in Sontheim have a broad range of steady rests in their standard portfolio, a special solution needed to be found for Wesa. “A small, lightweight, functional steady rest was required,” remembers Richard Sedlak, Sales Engineer at Röhm, in retrospect. Retrofitting the lathe with a steady rest was the special feature of a new work piece. Not only the ratio of the diameter of the work piece to its length - a part of the rear wheel steering of sports cars of a premium manufacturer in Swabia - challenged the production, the different concentricity also exacerbated the problem. “Such a part cannot be manufactured easily in just any workshop,” Johannes Weber clarifies the situation.

The special feature of the project: The steady rest is opened via the coolant pressure and closed again via the spring force. Richard Sedlak: “There was no hydraulic connection in the machine. And, in addition, the turret specified the installation interfaces: a standardised VDI shaft for taking in the steady rest and a connection hole for the coolant”. The solution at the machine: The CNC control moves the opened turret in position, the signal “Coolant on” follows. The clamping arms of the steady rest close and the work piece is now firmly supported and ready for the next machining step. Subsequently, the return spring force opens again the clamping arms of the steady rest.

Something that sounds very easy often turns out to be difficult in practice. The coolant lines have a non-return valve, which prevents a return flow of the coolant. This was also the case in Sprint 50. The consequence: The pressure continued to exist at the return line for the coolant, the spring had to work against the coolant pressure, which, in turn, prevented the flow of the coolant resulting in disturbances in the flow. A pragmatic solution was needed, which was a bypass. The CNC service provider Wesa and the clamping device manufacturer Röhm jointly developed a corresponding relief valve. The benefits of this solution: The coolant can now flow without hindrances.

The course of the project is described quickly. In July 2015, Richard Sedlak, Sales Manager of Röhm GmbH for Baden-Württemberg, identified the needs and the tasks at Wesa. In January 2016, Wesa ordered two revolved steady rests, the first of which was delivered in April 2016. The conversion to an additional relief valve with drain hole was done in June. Two weeks later, Röhm delivered the steady rest. In July 2016, Wesa reported: The steady rest is working! Hence, just one year passed from the first contact till the release of the product. The conclusion about the joint project is unanimous. Richard Sedlak and Johannes Weber confirm: “We work very well together”.